This is the first part of a series that will be featured on my blog that describes what bipolar disorder feels like to me.  In each post I will explore a single feature of bipolar disorder as I have experienced it.

Today, I want to discuss how I find bipolar disorder to be engrossing.

Now first things first, engrossing seems like a strange word to use to describe a mental illness.  Engrossing carries a sort of positive connotation, as in the phrase “the book was engrossing.”  If you describe a book in that fashion you’re probably recommending it.

Dialogue not altered in any way.

So am I “recommending” bipolar disorder?

Well no, of course not.  When I say engrossing, I mean as in this definition stolen from google: “absorbing all one’s attention or interest.”

I suffer form type 2 bipolar depression, which means I periodically experience a hypomanic state.  The typical reader of this blog knows what that is, but for those who may not be aware, hypomania is sort of like diet-mania.  If you don’t know what mania is, science has a GIF for you:

To be fair, that’s the way I look before eating chicken wings regardless of whether I’m (hypo)manic or not.

So anyways, back to engrossing.

I experience two different kinds of “engrossed” behavior, which I’ll call micro-engrossed, and macro-engrossed.  I’ll demonstrate what I mean with a couple examples:

Micro-engrossing is what I call it when my mind very intensely focuses on something for a short period of time (1 – 5 minutes), while simultaneously blocking out everything else.

The old house my wife and I lived in had a brick wall in the living room.  One night my wife was talking about her day, but I couldn’t hear a single word she was saying because I was micro-engrossed in – you guessed it – the brick wall (I didn’t say it made sense.  Remember – mental illness).

This is an artist’s rendering of that brick wall:

Pretty much what you expected.

But as my wife’s talking, my hyper-brain becomes completely engrossed in that stupid brick wall.  Soon my brain starts seeing patterns… Look at that diamond! 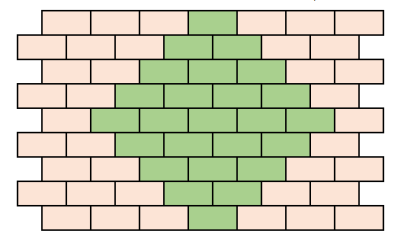 Can you tell I was one of the cool kids yet?

“… it’s frustrating because it seems like my boss doesn’t listen to me.  I get the feeling that she doesn’t respect…”

That took too long.  I wonder if there’s a faster way to determine how many bricks are in a diamond.  Is there a formula that can be applied that would scale to arbitrarily large diamonds?  There has to be…

Maybe it’s related to the number of bricks at the widest point of the diamond?

“…I was asked to pick up a shift this weekend so I need you to watch the girls, is that OK with…”

Of course!  A diamond is just a square tilted to the side…

I’m a genius!  I wonder what other patterns ther-

“Matt!  Were you listening to a word I just said?”

[Sleeps on couch, gets to stare at brick wall all night.]

I’ve summed up micro-engrossing in one, glorious GIF:

I wonder if there are any patterns in the boards of this basketball court?

Macro-engrossing is micro-engrossing just scaled up.  It’s when my brain becomes fixated on a problem over the course of weeks or even months.  It’s not as acute as micro-engrossing; I’m capable of carrying on a perfectly healthy conversation with my wife while engaging in this hypomanic behavior, but it’s always in the back of my mind.

Take this for example:

During a particularly strong hypomanic episode that I experienced last year while on vacation in Maine, I got it into my mind that I was going to single-handedly program a massively complex turn-based strategy video game.  Civilization, but BETTER!

Now this isn’t a blog about computer programming and algorithms, so I’m not going to elaborate much more on the particulars of how one goes about doing this.  If you’re curious, it implements a modified version of Conway’s Game of Life which you can see described by the man himself, John Conway, in this wonderful video.

The point is I found myself consumed by this problem while on this vacation.  While my family was relaxing and enjoying a well-earned week off, my mind was humming on overdrive – determined to find the answers!

Ultimately, this phenomenon is the inspiration for the name of my blog, Loudest Minds; a reference to the disquiet of my mind – the constant racing of thoughts that characterizes the manic and hypomanic episodes of many people suffering from bipolar disorder.

I used to think of this engrossing behavior as a gift; a means to achieve moments of brilliance.  But I’ve come to realize that mania is not a superpower, it’s a curse; because as soon as I solved the problem that had consumed the entirety of my mind’s resources for weeks, the depression returned, and I abandoned the game like so many other projects before it.

So that’s how I find bipolar disorder to be engrossing.  I hope you were thoroughly engrossed by this blog post!  If you were, share it with your friends!

If you suffer from bipolar disorder, do you experience a similar phenomenon?  I’d love to hear about it!

Matt is a husband, father, and professional who was recently diagnosed with type 2 bipolar disorder. He is the owner of Loudest Minds, a site with humorous and informative posts to help those suffering with mental illness and addiction.

18 thoughts on “Bipolar Disorder Described in a Word: Engrossing”